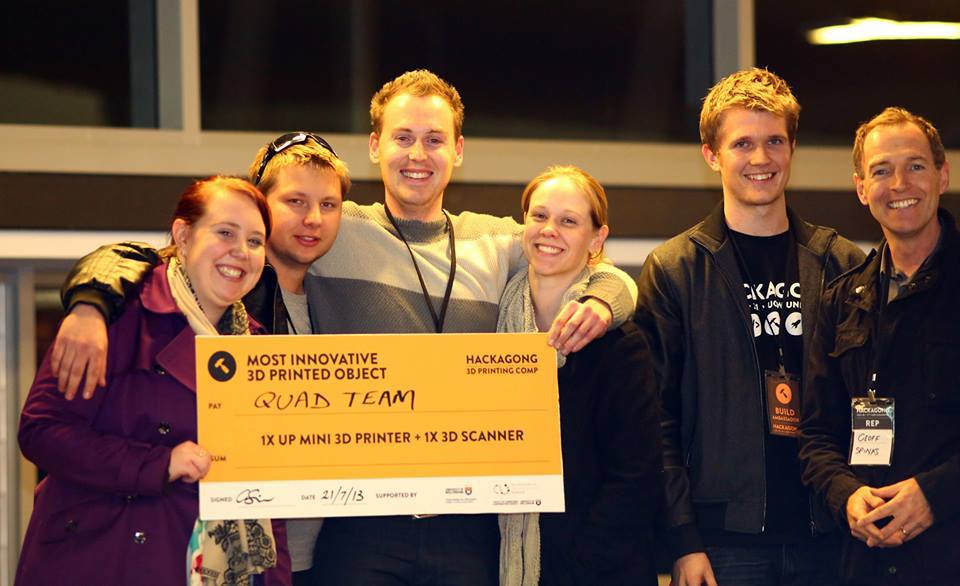 Over 100 of the most talented individuals you could hope to meet, spread across 34 teams, competed across 9 different prize competitions this weekend at Hackagong 2013 held at the UOW uniCentre. A group of notable judges determined the Top 10 teams, and the winners of each of the prize categories (excluding the Major Prize) where they were presented at the UOW uniCentre. The prototypes which teams built from start to finish in just 30 hours were astounding and a testament to the talent and potential of the Illawarra ICT sector.

In no particular order, here are the winners of each of the prize competition categories. We will be pushing out interview blog posts on each team with further details and photos about their creations in the coming weeks.

What: Combining the agility and maneuverability of a quadrocopter with the lift and flight time of a fixed wing aircraft.

What: Map peoples personality onto a surface that is unique to everyone and helps them find their one true love.

What: 3D printed all in one fold-up table top post-apocalyptic truck game.

Prize: $1500 worth of high-end additive fabrication time on any Objective 3D machine (thanks to Objective 3D)

What: Whispr gives anyone a temporary, private place to chat with their friends, colleagues or clients.

Prize: $100 Canva credit each + tickets to Canva launch party (thanks to Canva)

What: A GPS tracking platform for companies with dispatched based services.

Prize: 12 month subscription to Tuts+ Premium for each team member (thanks to Tuts+)

What: A multiplatform, multiplayer, collborative game.

Prize: BlackBerry Z10 smartphones each (thanks to BlackBerry)

Winners: Team Moolah’d (these guys traveled up from Melbourne!)

What: A re-enactment of the photo from the Social Network